World for the Broken Tour 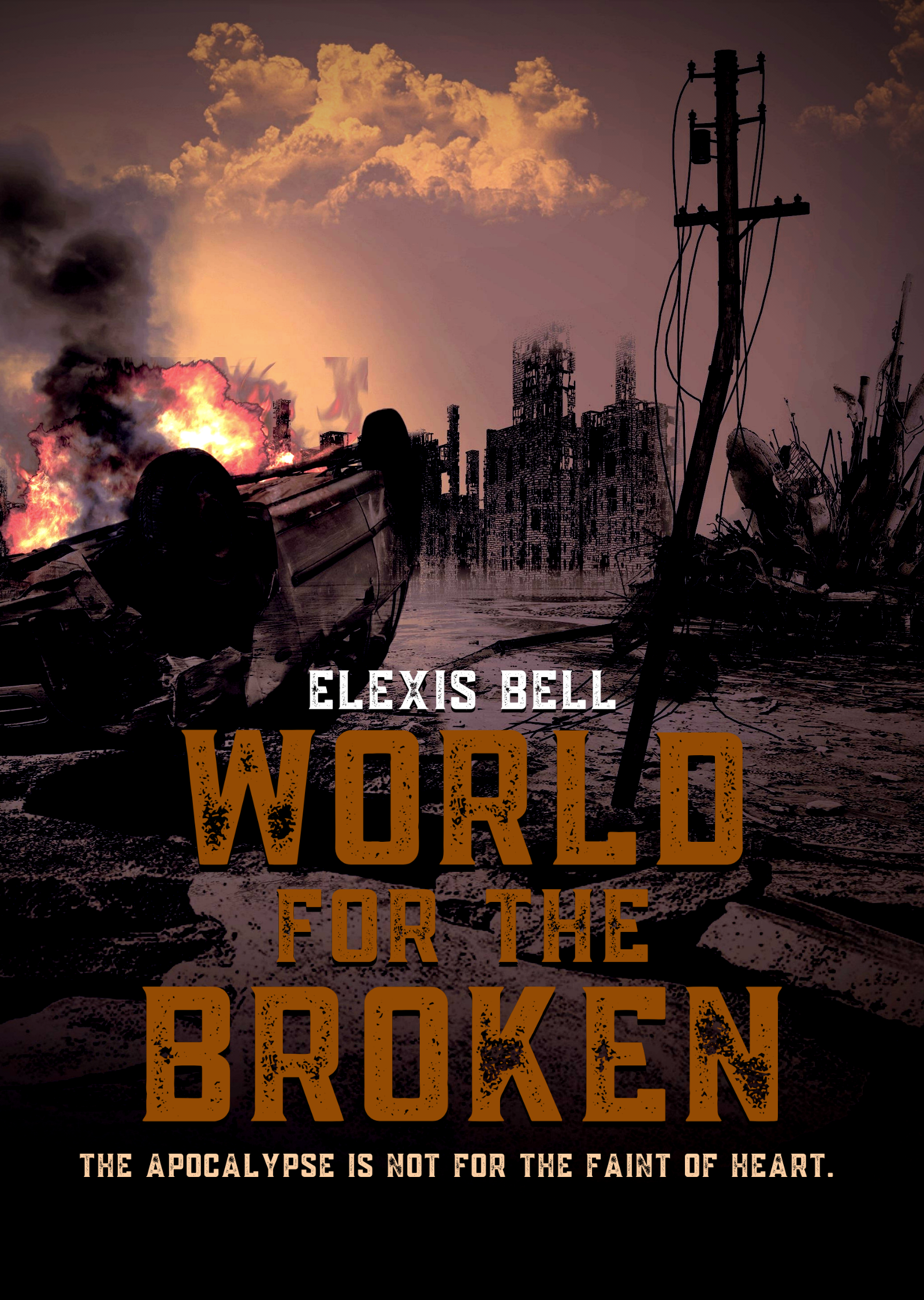 Fading into unconsciousness, Christian watches psychotic thugs drag his sister-in-law and nephew away to suffer in the city they just escaped. Left for dead near his brother’s corpse, he has but one hope for survival, rely on the pretty stranger who stumbled across him. Not exactly smart after the apocalypse.
Encumbered by the lingering effects of her own violent past, Chloe struggles against her need for independence. Trusting a stranger found lying in the snow is risky, to say the least. Yet, she patches him up.
As they strive to rebuild their hearts, the harsh world they’ve been thrust into promises to tear them apart. Because Christian’s rescue attempt can’t wait. Every second in Chloe’s idyllic hometown means another second of pain for Christian’s family, leaving Chloe with a choice. Risk her life to help Christian save his family? Or condemn them all to a slow death? 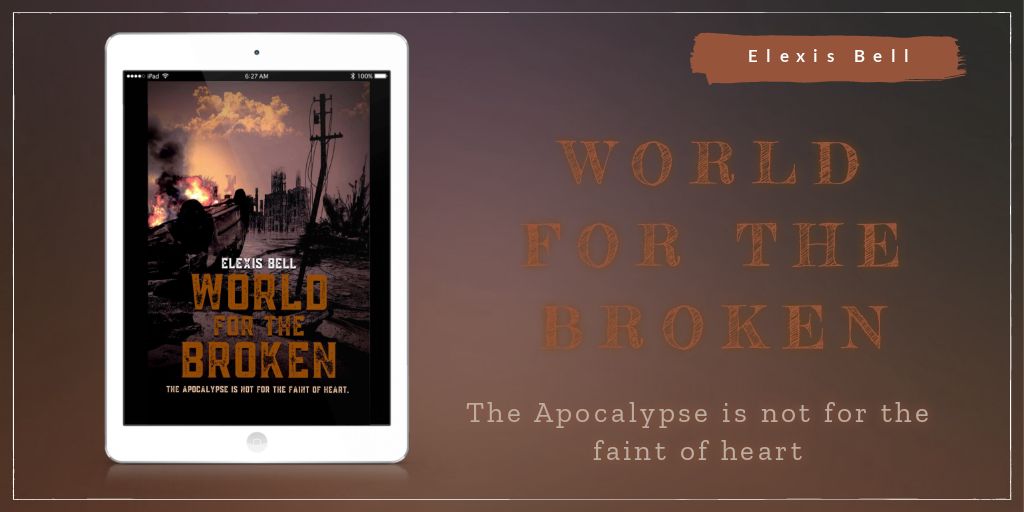 Snow crunches beneath feet, not far from my aching head. Dazed, I wonder how I could have let someone get so close. I try to lift my face from winter’s blanket, but the world threatens to fall out from under me with even the slightest movement. Head pounding, I struggle to center myself. Holding as still as humanly possible, I strain my ears to pick out the size of my newest friends.

A trickle of warmth slips through my hair, dripping over my scalp and down my forehead. It’s almost pleasant, except for the little voice in the back of my mind telling me that it shouldn’t be there. As if for emphasis, a cold wind sweeps over my back, the only part of me visible above the snow. Warmth has no place here.

I remember how to open my eyes, lifting my head as I do so, and see red swirling before my gaze. The ground tilts and whirls, mixing melting snow and blood in psychedelic patterns. I slam my eyes shut once more, letting my head fall to the ground. My face splashes in the watered-down blood.

Another foot breaches the snow with a crunch. The danger that I’m in screams back into focus, so loudly my skull aches with it. Or maybe that’s just the head wound talking.

Fucking get it together, Christian.

I growl inwardly, but I’m excited that I can piece even that together amidst the agony bursting across my scalp.

Are these more of The Wolf’s men, come to finish the job?

Then, it all comes back to me, hitting like a ton of bricks. Tate, Jesse, Karen…Are they safe? I don’t know, don’t remember much, and that scares me.

What if The Fangs were close? What if they heard her song?

What if they found us?

Then, the blizzard hit and made our tracks impossible to miss. The Fangs found us within a day of the first flakes falling. The scene bursts across my eyelids, like some horrible version of the instant replay used in sporting events back before the war.

We’d just stopped so Tate could go to the bathroom, which took an unfortunate amount of time given the layers the poor kid was wearing, and we were about to set off again. Not that we really knew where we were going.

Away from Breyerville and the brothel Karen was forced into. Away from The Wolf and his cronies, demanding payment and tribute from all locked within his stupid walls. The walls we all helped him build, back when he seemed like a decent human being, someone we could trust to help lead us through the end of the world.

Funny thing about the apocalypse, that. It brings out what’s hiding underneath the surface. Given time and power, The Wolf revealed his true nature, evil incarnate.

The Fangs found us unaware. Karen and Jesse had been arguing again, with Jesse lobbing some new unfair accusation at his poor wife. I’d been a little worried, thinking I may have to step in again and…calm my brother down.

Tate clung to his mother, burying his face in her legs. Her hands covered his ears, trying to spare him the worst of the argument, even as he shielded his eyes with tiny hands.

We heard the gun go off, loud and close. Instinctively, instantly, I ducked. A habit I wish I hadn’t had the opportunity, or the need, to cultivate. Another crack and a bullet meant for me sailed over my head.

A third shot was attempted, presumably to correct their mistake in thinking I wouldn’t drop to the ground. But the hammer fell, and the gun merely clicked. Empty. Luckily, they haven’t figured out how to reload their own ammo.

Before my eyes, my little brother fell. With a small hole in his forehead, blood trickling from it, Jesse landed in a crumpled heap. Thankfully, he was facing the sky. I’d rather Tate remember his father’s dead eyes than the state the back of his skull must have been in.

Four Fangs rushed us, giving me no chance to mourn.

One ripped Tate from Karen’s grasp and threw the kicking, screaming little boy into the snow. Heart racing, all thought gone from my mind, I threw myself upon The Fang whose boot hung in the air, poised above Tate’s head, and we went flying into a snowdrift.

I righted myself first, climbing atop the man, and pummeled him with everything in me. Rage filled me and boiled over. I remember the blood splattering across my face, some my own as my knuckles tore open a bit more with each hit, but mostly from The Fang, a dirty looking man with five o’clock shadow on his entire head. His hood fell back, and the scarf that covered half his face was soggy with blood.

Below each eye, the tattoos of fangs marked him as a bona fide member of The Wolf’s Fangs. The quality of the first tattoos meant he’d been a member for a while. Since before they ran out of traditional ink a year and a half ago and had to start making their own. Since before the legitimate tattoo gun broke a year ago, and they had to do it the old-fashioned way. He’d been a Fang for at least a year and a half. Maybe longer.

Another Fang followed, crushing snow beneath sprinting feet, leaving the other two struggling to contain Karen’s fury, all 5’4” of it. They shouldn’t have separated mother and child. Swearing and screaming and flesh-hitting-flesh rang out behind Christian, with Tate crying in the snow not far off to the right.

“Stay there, Tate!” I screamed, sending another fist into the face of the man who would have killed my nephew.

Anger almost got the best of me, and I momentarily lost track of the assailant approaching me at full tilt. As the Fang beneath me faded, head lolling to the side in death, I sprang to my feet. I spun, just in time for another Fang to barrel into me, a palmed blade ready to sink into my flesh.

Back down into the drift I went, and this time, I didn’t come out on top. The Fang hadn’t expected me to turn, so his blade merely gashed my side, rather than digging in. Unbelievable luck.

Twisted up in the cloth of my jacket, the spin also jerked the knife from my assailant, sending it flying off somewhere. A miracle.

But that’s where the good news ended.

With something clenched tightly in his fist, packing it for rigidity, The Fang landed a solid blow, unfortunately, located squarely on my temple thanks to the awkward way we landed.

I nearly passed out then and there, retaining only enough consciousness to hear Karen scream out, “Stop! I’ll go with you if you just stop! Leave my baby alone!” Tears choked her voice, but it carried, nonetheless. All motion stopped, even the man sitting atop my chest stilled, unafraid of his seriously dazed victim.

“Please,” Karen begged. “Please, just…we won’t cause any more problems. Just…don’t hurt him.” I heard her slump to her knees, heard the rustle of fabric, and Tate’s whimpering as she pulled him to her breast.

I saw the grizzled Fang standing behind her spit into the snow, mostly blood. Bright red gashes lined his face, leaking openly. He jerked his chin up at the man on top of me, and my chest got lighter as The Fang heaved himself onto his feet.

Karen’s hands clutched at her son, pressing him tightly against her. Her pale face was rosy with the cold, and her long, black hair tumbled in a tangled heap, spilling free from the hood of her jacket, partially concealing Tate from view. Between her hair and his too-big jacket, I couldn’t see the boy’s face.

Rather than walking away, my assailant turned toward me. With black eyes rimmed with seven fangs and a cruel smile lurking beneath them, he pulled his foot back and slammed it into the left side of my head.

I remember the pain, arcing through every synapse, filling every cell of my body. I remember curling onto my side, watching through eyes barely open, clouded with the blood that dripped into them, as Karen and Tate were led away, sobbing. All our packs were gathered up and taken, as well.

Now, lying broken in the snow, the reality of their absence wallops me, leaving me breathless and gasping.

They’re gone. All three of them. Jesse is dead. Karen and Tate…who knows. Will they kill Tate? Or use him against Karen to keep her pliable?

Disgust burns within me at the thought, simmering beneath the icy hands of agony as they steadily rip my heart to shreds.

And what of me?

I’d been so sure I would die, even as I slumped sideways, rolling onto my stomach. The snow fell around me, sapping the warmth from my body. When darkness took me, I thought it the end.

But now, shockingly gentle hands roll me over, and the ground tips beneath me. Stomach roiling, I worry I may vomit, but manage to hold myself together. Barely. My eyelids flutter, stars exploding in my vision.

A shadow takes form, just beyond the starbursts. A woman.

Brilliant red hair tumbles forward, hanging in loose waves just above my face. A gloved hand pulls the scarf down from her nose and full mouth, revealing pale cheeks flushed with cold. Meanwhile, surprise registers in her shining emerald eyes. Turning her head to the side, she speaks in a voice that sounds a hell of a lot like salvation. “He’s alive.”

She leans forward, no doubt getting her pretty hair dirty with the blood that coats my face as the delicate strands brush my skin.

“Can you hear me?” she asks, very gently.

I nod. Sort of. The motion upsets my already spinning equilibrium even more, and my eyes fall shut, robbing me of the sight of her.

But what could I ask? Please save them? Please help me?

She owes me nothing. She and her companions will likely take whatever they can from me, from Jesse’s corpse, from the body of the Fang that I killed. They’ll desert me, likely take the shirt from my back.

Before I can ask her anything, the darkness claims me again. 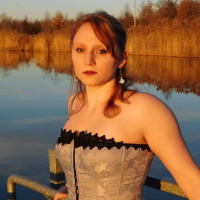 Elexis Bell is a quiet nerd with too many hobbies, including everything from gaming to shower-singing and even archery, weather permitting. She specializes in sarcasm and writing stories that make people feel. She’s made a home for herself with her husband, their dog, and a small army of cats.
Contact Links
Website
Facebook
Twitter: @bell_elexis
Blog
Instagram: @elexis_bell
All Author
Goodreads
Purchase Links
Amazon
Barnes and Noble
Kobo
B-A-M
a Rafflecopter giveaway

Comments Off on World for the Broken Tour