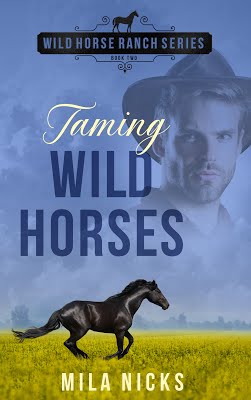 He’s ready to be a better man…

Chase Collins started the summer a brooding, broken man. He was content
keeping to Wild Horse Ranch, where he could tend to horses and stew in
peace. When Samara Grant reentered his life, she changed everything, and now
he wants to prove to her—and himself—he can be the good guy he always hoped
to be. What he doesn’t know is that it’s darkest before the dawn…

She’s done running from the past…

Only a summer in Lutton, Texas. That’s what Samara Grant told herself when
she arrived. Now months into living in the small town, she’s carved out a
life for herself managing her grandma’s B&B, riding horses and falling
in love for the first real time in her life. After so many years spent
running, she wants happiness, but unfortunately her tragic past is back to
haunt her…

Reed Ward is supposed to be the guy who has it all. He comes from the most
prestigious family in Lutton. He’s handsome. He’s charming. He always gets
the girl—so why is it that he’s on the sidelines watching his life go up in
smoke? His family’s torn apart, his ranch is no longer his, and the woman
that’s supposed to be his wants his best friend. One things for sure: he’s
not going down without a fight…

Samara opened her eyes to spot Reed across the room.

But he wasn’t approaching her to give an update as she had hoped. He was headed for the door marked Exit with a lighter and pack of cigarettes in his hand. Samara followed him.

“What’s going on?” She came up from behind at a fast stride and stopped in front of him for the opportunity to glare. “How are you out here smoking when Gramps—”

“You handle stress your way. I’ll handle it my way.” Reed lit up, one hand cupped around the side of his mouth as the other lit the cigarette. He spent a second inhaling, closing his eyes as if savoring the feel, touch, and taste, and then blew smoke. “Gramps had a stroke. The doctors are still with him. It’s not looking good.”

“What does that mean—not looking good?”

“It means what it sounds like it means. It means the docs haven’t told me shit. Nothing but vague pleasantries,” snapped Reed. Irritation was scribbled on his face, his skin unusually pale with splotchy red on his cheeks. “So here I am—out here trying to keep a hold on my sanity. Might want to think next time you jump to conclusions.”

Samara frowned, her glare softening. “Sorry. I shouldn’t’ve… It wasn’t my… I’ll go.”

She had no clue where she was headed as she turned and moved toward the nearby parking lot, but far away from Reed seemed like a good idea. For once not because he’d pissed her off or disgusted her; for once because she’d been wrong about him. Reed was worried about his grandpa and she felt like shit for thinking anything different.

A hand enclosed around her elbow and held her back from taking more than a couple of steps. Reed had reached out and grabbed her to keep her from leaving. When she glanced at him from over her shoulder, another look she had never seen from him was on his face. His brows were knitted and he had a sober expression on his mouth, his eyes pinning hers.

“Gramps would want you here. You should stay.”

“Then I want you here,” he said. He hadn’t let go of her arm. “Remember all that ’bout getting through this together? I meant it.”

Samara slowly nodded, unable to think of anything to say, an odd buzzing in her ears. Reed seemed to know what she needed to calm her nerves. He held up his half-full pack of cigarettes and she obliged, taking one and lighting up.

Mila Nicks is on a mission to pen heartfelt and entertaining love stories
featuring women of color.

When she isn’t writing diverse love stories, you can find her
globetrotting, sampling new cuisines, and spending quality time with her
spunky pet Chihuahua, Zayden.

For more on Mila, including news on upcoming releases and story freebies,
check out her website and subscribe to her newsletter:
https://www.milanickswrites.com/