Playground in My Mind – Blitz 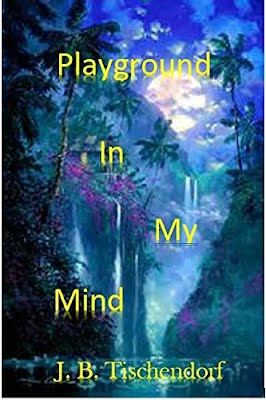 Playground In My Mind is the story of Taylor Bouchand, a woman who enjoys success through creativity.  Each day she wakes with a sense of accomplishment in her artistic ability that has earn her not only an impressive income, but respect for her work as a sculptress and painter.  Taylor controls her own destiny
That is until she meets a little boy in a gazebo on a cold wintry night.  He is just a little boy, with an odd way of saying things when they first meet, but all of that changes as Taylor sees him again and again. He tells her is name is Michael and she learns that the more she sees him the closer she is drawn to him.
Taylor realizes that there is something different about Michael, but not even her creative mind would have guessed what was happening.  Michael, is aging faster than humanly possible.  At first she tries to convince herself there is a logical explanation and what she thinks is happening is not possible.  Only there is no logical explanation.
Taylor decides she needs professional help and sets up an appointment with a psychiatrist.  This is not easy for her as she is aware that in order to create her life is about mystery and adventure.  This could all be her imagination.  Yet, she can’t believe that to be true.
Being a psychiatrist Dr. Paulson has treated a great variety of mental disorders ranging from mild and temporary to severe and chronic.  Over the years he has helped cure fear, panic or phobias manifested in certain situations that can greatly affecting a patient’s career, social life and mood.  It helps that he knows a little about this new patient Taylor. He knows her work and her reputation.  But it takes several sessions with Taylor, before Dr. Paulson finally hears her story.
His immediate opinion is that she is suffering from a mild depression as the result of emotional trauma and tragic events in her life.  As she shares more, it still doesn’t surprise him, but he decides that Taylor may suffer from hallucinations and delusion.  He has dealt with many patients who envision something that cannot be.  It is a matter of determining the cause which he is sure will lead to a logical explanation.
Only Dr. Paulson has a change of heart when he has a dinner party with his friends Peter Newman, the husband of Christine who passed away in a fire many years ago, and the Mastersons who are clients of Taylor.  Neither one knows of a connection between them and the famous Taylor Bouchand.   There are many surprises unveiled that evening that would uncover secrets and open their eyes to strange possibilities.  They would all soon realize that life isn’t quite how we perceive it, but holds secrets from all of us.
This story is set in the suburbs of Rochester in Upstate New York, runs about 119,000 words and is somewhat similar in tone to Octavia E. Butler’s Wild Seed

I began writing at the age of twenty because it was good therapy for me as a mother of an achondroplastic dwarf, at a time when there was not much knowledge or a support group.  To hone my skills I completed the University of Washington Certificate course, Introduction on Fiction Writing in September of 2001.  I attended a seminar on Writing Techniques and Styles, and another entitled How to Become a Successful Editor.  In 2016 and 2017 I participated in the James Paterson online courses for screen play and fiction writing.  As an avid reader, I organized a local Book Club here in Irondequoit…  I was presented in, “Two Thousand Notable American Women, Third Illustrated Edition”, prepared by the American Biographical Institute and published in 1991.  I was highlighted in an article by About Time Magazine in their Career Profile section in August, 1982.  Then shortly after the article appeared I was on the air for an interview at a Syracuse Cable Station in a 30 minute segment entitled “Successful Black Women in New York State” and taped another 30 minute segment for a program entitled “Spotlight On You”.  I appeared on WOKR-TV, “Shades Of Gray Program, where I was interviewed for Outstanding Achievement Recognition.  This took place in 1990. I was interviewed for an article on the front page of the Irondequoit Post for my fiction book released in 2000 and entitled Til Death Do Us Part?  I appearances on RNews (now known as YNN) in Rochester New York for my fiction book, and a nonfiction book entitled Who Says I’m Small in 2006, also promoted at the LPA (Little People of America) in Orlando Florida and Erie Pennsylvania in 2008.  I opened my home base computer business, J. Tischendorf Services (originally J. Saxton Services) in 1984 and Pageant Perfect Production in 1990.  I placed in the top 10 of the Mrs. New York State/America Beauty Pageant in 1983 and did freelance modeling for department stores.  I did photogenic modeling for Eastman Kodak Company’s Phototech Division and modeled for the Gannett Newspapers 1983 Annual Report and the United Way Annual Report.  I even participated in the special number drawing event for the New York State Lottery.  I continued to build this experience by commentating high school fashion shows.

In 2010, Tate Publishing released by non-fiction book, “The Madman, The Marathoner”.  Today I have several manuscripts, some of which I have entered in the Amazon book contest, and others that I continue to work on.

For the past several years I have participated in Author’s Night at Barnes & Noble which has kept my face in the public eye.  When it comes to wanting to be published and write, I am the real deal!
Contact Links
Facebook
Promo Link
Purchase Links
Amazon
B&N
IndieBound
Lulu

Children’s Picture Books Publisher: Iguana Books Date Published: April 16, 2019 Get out there with

Comments Off on Playground in My Mind – Blitz