Nestled within a thought-form in Earth’s vast realm, Outpost Gypsy Tree becomes home for six adventurous teenagers from various parts of the world. Charged by their own desire for peace and love for humanity, they are assigned to clear the earth’s light portals of the evils of mankind, starting with the North Portal. To do so, the teens must journey back in time to the winter solstice of 3107 BCE to decode an archaic sequence at Ireland’s historic Newgrange that will unlock a Neolithic chamber leading them to the ‘other world’ of the gods of Erin. To prove their worthiness, courage, and commitment to battle the darkness, they must journey through the traitorous Cave of Damnation and face an encroaching inferno. At the core of this bizarre journey is the staff of Outpost Gypsy Tree: Eittod of Tulsun Minor, an ancient being with a rainbow-colored body, and Bezen and her son, Mingo, inhabitants of Early Earth.
This is a book for all ages. 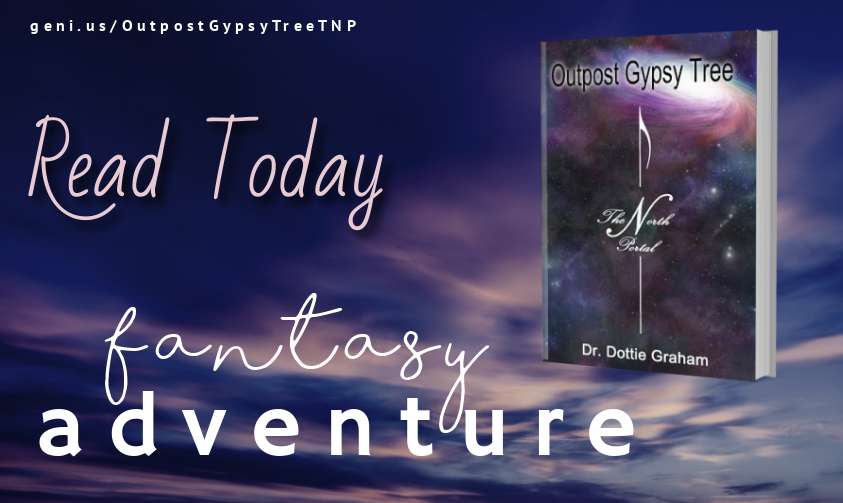 Other Books by Dr. Dottie Graham

South Portal Cover Share Link
Outpost Gypsy Tree: The South Portal
With the North Portal in Neolithic Ireland cleared of the evils of mankind, Drew Megan Campbell and the light travels are once again called into service. Charged with clearing the South Portal located in Peru—or as it was once known, Og—they must travel back in time to 10,500 BCE to the final days of the continent of Lemuria, to retrieve a sacred disk from the crumbling Temple of Illumination. Aube and Gar’s great-grandfather from the stars, Commander Auben Gou-Drah, and his crew of the Bintok must rescue the light travelers and the sacred disk from a watery grave. At the core of this bizarre journey is the staff of Outpost Gypsy Tree: Eittod of Tulsun Minor, an ancient being with a rainbow-colored body, and Bezen and her son, Mingo, inhabitants of Early Earth.
Amazon
B&N
IndieBound

Zero hour had arrived. The first chink of sunlight streamed through the roof box. It slowly made its way down the passageway and illuminated the ancient triple spiral carving in the stone womb. With her eyes fixed upon the pinnacle of the three-foot high obelisk before her, Drew Megan Campbell slowly rubbed a small white quartz stone between her hands. As Eittod had instructed her, she held the stone just inches above the tip of the obelisk’s pinnacle. She sucked in a deep, nervous breath; her heart pounded hard against her ribs; her face was tense, flushed. After all, this was what she was born to do; it was her task and hers alone, her great-grandfather had said. Drew had to trust, even though she did not yet know the outcome of her next action. Her fellow light travelers’ eyes were transfixed upon her. Their fate rested in her hands. As the triangular notch on the underside of the small quartz touched the capstone, three things happened in rapid succession: brilliant aquamarine lights flashed throughout the stone chamber blinding them; the earth began to tremble; and the heavy, scraping sounds of moving rocks deafened them. It can’t end like this, we’ve come too far , Drew thought, bracing herself as the ground below her feet shifted. Locking eyes with Patrick, they both instantly knew it just couldn’t end like this! The others stared at Drew with concerned eyes as the earth below their feet moved downward. It was as if the ancient chamber was devouring them whole. They reached for each other’s hands and gripped tight. The stone chamber began to descend like a modern-day elevator, but there was no light board indicating the number of floors below or above nor piped-in soothing music. Rather, ear-splitting scraping and groaning sounds of ancient heavy rocks vibrated through their bodies, rattling their bones and clattering their teeth. The aquamarine flashes became more intense, more tangible, surrounding them as if holding them all safely in place. An avalanche of thoughts spilled through their heads but no one made a sound. It was all happening in slow motion, freezing them speechless. Drew could feel their fear, hear their thoughts. Telepathically, she reminded them of her kinship with Patrick, hence this can’t be the end. Drew’s life flashed before her.

Outpost Gypsy Tree, the North Portal is the first in a series of books for young adults. Dr. Dottie Graham first conceived of the series in the early ’90s. It has gone through many evolutions over the years as she stepped into her role as a storyteller.

Her inspiration for the series grew out of vast life experiences as a mother, grandmother, an RN, a Doctor of RoHun and a certified practitioner, mentor and instructor of the worldwide Healing Touch Program.
She believes that everyone needs to own their specialness and step into the true nature of themselves. Thus, the characters are mirror images of the greatness within everyone, especially the young.
Dottie’s goal for the series for young adults is to awaken their imagination and ignite within them a love for and responsibility to humanity.
This is a book for all ages.
Dr. Dottie Graham is the Founder and CEO of The Graham Institute of Self Awareness (GISA) and the Virginia Center for Healing Touch (VCHT), and is its primary teacher and clinician. A licensed health care professional for over 50 years, she received her doctorate in RoHun from the RoHun Institute, Delphi University, Georgia, in 1994. She is an Advanced Regression Therapist, a Hypnotherapist, and a Certified Healing Touch Practitioner, Instructor and Qualified Mentor. She is an International Field Instructor for the RoHun Institute, Delphi University, GA.
Contact Links
Website
Facebook
Promo Link
Purchase Links
Amazon
B&N
IndieBound
a Rafflecopter giveaway

Comments Off on Outpost Gypsy Tree: The North Portal Tour