His wife seems distant, yet perfectly happy. They work on different schedules and pass like ships in the night. But that’s how marriage is after so many years, right?

When Danny meets a mysterious girl, his idea of the meaning of love shatters at his feet…

She’s not extraordinary, but somehow she’s so much more than just another girl. When he catches her gaze, he knows deep in his gut that she’s the one—the love of his life. But being a decent guy, he holds his feelings in check, and there is no ulterior motive when he shares a coffee with her. As she leaves, she gives him a business card. That’s all there is to it.

Her name is Ella. And after that, she is nothing more than a fond memory.

Danny puts Ella out of his mind and moves on with his life—until his world falls apart…When his wife confesses to having an affair and demands a divorce, his life is thrown into chaos. It’s a challenge adjusting to the single life, but it’s not impossible. As time passes, he continues to reminisce of his brief encounter with the woman he’s sure was his chance at true happiness.

How far is Danny willing to go in the pursuit of love? How far would you when, in all probability, you are only… 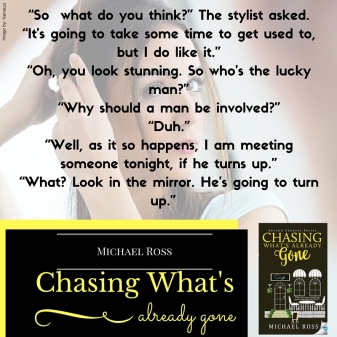 Chasing What’s Already Gone will be available on Amazon on July 26th!

It was a strange and twisting road that led to the publishing of my second novel.

Born and raised in Bristol, England. I spent my adult life in business, the majority of that time marketing cars. I eventually owned the largest Saab specialist in the world, before a divorce put an end to that part of my life.

This led me to leave Bristol to live halfway up a mountain in the Welsh valleys, start a part time six year English Literature course at Bristol University, and attend creative writing classes in Cardiff.

My interest in English literature flourished and I have won several prizes for my short stories. My first book, ‘Twenty Short Stories – Settling a score,” reached No 6 in the Short Stories Best Sellers and is still available. My second novel, a romantic thriller entitled Hand Over Fist was released earlier this year

Chasing What’s Already Gone evolved from a short story Carpe Diem in my second anthology Twenty One Short Stories. I could not get the two main characters out of my head and I had to find out what happened to them after the end of the short story.

I now live very happily halfway up that mountain in the Welsh Valleys with my wonderful partner, Mari, and our rescue dog, Wolfie.

All you have to do is like the below Facebook pages & a winner will be picked on July 29th.

I’m having the suckiest day ever. First, my father, aka Mr. Grumpy Pants, calls to say his nurse just walked out on him. Likely story. I rush home to pack only to walk in on my husband getting it on with his younger, skanky secretary. Unfortunately, my quick weekend trip home to fix Dad’s problems turns into a stay of a few weeks. Luckily, I’ve got Danny, the neighbor boy I had a crush on when I was a dorky, braces-wearing, nose-buried-in-a-book teenager, and a brand-spanking new blog to keep my mind off things. Before I know it, I’m writing product reviews of vibrators and getting questioned by a store rent-a-cop at the world’s worst date ever. All while trying to figure out how to take things with Danny to the next level. Not to complicate things or anything but my boss decides to give me an ultimatum – come back in four weeks or don’t come back at all. How in the world did my life get so complicated?
Excerpt
Danny clears his throat and turns to me. “I was going to ask you something about your blog.” I raise an eyebrow at him. “Why don’t you ever blog about me?”
I nearly choke on my wine. “Blog about you? The blogs are about my dates.”
“Babe, pay attention.” He grabs my chin. “What do you think we’re doing?”
My eyes nearly pop out of my head. “Being good friends?”
He shakes his head. “Um, no. I’m wooing you.”
“Wooing me?”
“Yeah, wooing.” He points between us. “Do you think I drink wine on my porch with just anyone?”
I’m confused. “You don’t like wine?”
He chuckles. “Look at me. I’m a single guy with a kid. Why would I have wine in the house?”
The dominoes begin to fall in place. “Oh.”
“Yeah, oh. Come over here.”
He takes my wine and places it on the ground next to his glass before firmly grabbing my head and planting his lips on mine. The kiss is soft, sweet, and everything that’s right in the world. And it’s not enough. I want, no need, more. I grab his neck and pull him closer. He growls and grabs my head to tilt it to his liking so he can deepen the kiss. I’m putty in his hands by the time he eases up and pulls back. What. Just. Happened?
About the Author

I grew up reading everything I could get my hands on from my mom’s Harlequin romances to Nancy Drew to Little Woman. When I wasn’t flipping pages in a library book, I was penning horrendous poems, writing songs no one should ever sing, or drafting stories which have thankfully been destroyed. College and a stint in the U.S. Army came along, robbing me of free time to write and read, although I did manage every once in a while to sneak a book into my rucksack between rolled up socks, MRIs, t-shirts, and cold weather gear. A few years into my legal career, I was exhausted, fed up, and just plain done. I quit my job and sat down to write a manuscript, which I promptly hid in the attic after returning to the law. Another job change, this time from lawyer to B&B owner and I was again fed up and ready to scream I quit, which is incredibly difficult when you own the business. Thus, I shut the B&B during the week and in the off-season and started writing. Several books later I find myself in Istanbul writing full-time.
Contact Links
Website
Blog
Facebook
Twitter
Google+
Pinterest
Goodreads
Amazon Author Page
Purchase Links
Amazon
Smashwords
Giveaway
$10 Amazon gift card
a Rafflecopter giveaway