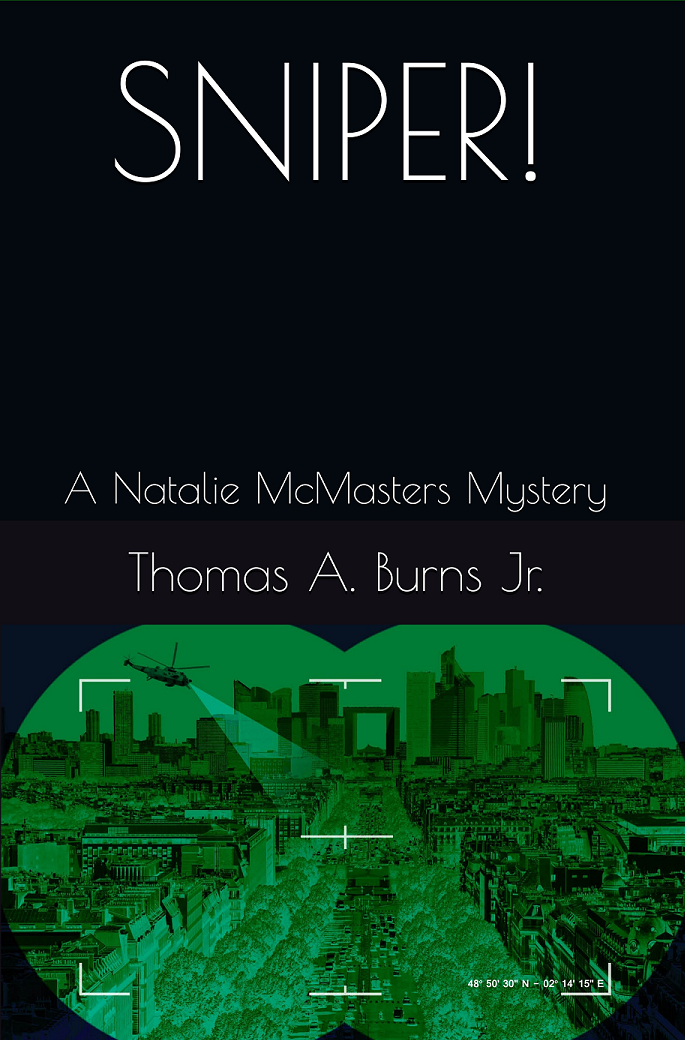 A crazed sniper. A loved one wounded, in danger of death. The unforgiving
Fake News media. And a hidden villain more loathsome than any that Natalie
McMasters has encountered before.

Nattie’s in the crosshairs as a series of seemingly random
shootings terrorizes the city. She must fight to keep her polyamorous
family from disintegrating, her emotions from running wild and her
personal integrity uncompromised. This would be a formidable task for
anyone, much less a twentysomething college student who just wants to
graduate and get on with her life. Nattie must rely on old friends and
new, but how can she even, when friends can become enemies in the blink of
an eye? As Nattie nears an emotional meltdown, society collapses along
with her, as the sniper’s depredations take their toll on the
city.

It’s 0300⎯oh dark thirty if I’ve ever been there. I’m driving down a two-lane road on a ridge. One side is a forest, the other overlooks a valley which is packed with homes. Suburbia, U.S.A.

Rounding a curve, I come to a place where the shoulder widens and tire tracks indicate that many have pulled off to enjoy a smoke or neck a little while looking down on the pastoral scene below. I follow suit, then shut off the engine and get out of the truck. This is my final firing position today. Going to the rear, I open the tailgate, flip up the bed cover, and climb in. I reach up and close the bed cover again, leaving the tailgate down.

I open the backpack I find inside and take out the pieces of my weapon system. It only requires a minute to assemble the rifle—insert the bolt into the receiver, screw the barrel on in front, followed by the suppressor, the bipod, then slap a mag of 7.62s into the bottom. I remove the lens caps from the scope, put the rifle to my shoulder, and rest the bipod on the tailgate. Only about an inch peeps out from under the bed cover, so it’s highly unlikely anyone driving by will even notice.

There’s only a quarter moon tonight, so it’s still too dark to survey the killing ground, but that’s OK. The most essential quality that a sniper must possess is patience. Lying as still as a corpse, I mentally review the mission parameters—insertion is complete, camo in place. All that remains is recon, carrying out the mission itself, and exfiltration from the FPP.

As the sun rises, the homes transform from a uniform grey to a colorful palette on a green background. This is an older neighborhood, so no two adjacent houses are alike. I begin my survey⎯ideally, I’d like to take out a target after they get into their car. That will be less obvious than dropping them in the driveway, allowing plenty of time to elapse before the body is discovered so I can be long gone. The streets of the subdivision begin to fill with traffic, but I don’t want to take out anyone who’s made it out to the road. The longer it takes people to realize what’s happened, the greater my chances of a clean exfil.

I catch a glimpse of movement in a driveway. A side door opens, and a boy about ten comes out. I capture him in the reticle, framing his head and shoulders. It’s short range⎯only about 100 meters. I take one more check of the surroundings and it’s a good thing. The door opens again and mom and little bro exit the house⎯I guess she’s driving everyone to school. I abort the target and look for another.

A few blocks away, a garage door opens and the rear of a car appears. Placing the reticle on the passenger window, I can see the silhouette of the driver inside, but the body of the auto provides enough concealment to make a precise shot impossible. I’m not looking to wound. I abort again.

Finally, patience pays off, as it always does. A guy comes out his front door and goes to his car in the driveway, parked with the front facing the street. It’s a red Mustang, and he caresses the hood as he passes in front of it⎯he really must love that car. He unlocks the driver’s door and slips inside as I put the reticle on him and make the range about 400 meters. I let him pull the door shut before I squeeze off a round, and I see him slump toward the passenger seat. Perfect left temple kill shot.

I open the bolt and eject the round, push forward to load another, and survey the scene once more. Shit. Here comes wifey, out the front door, holding his briefcase. She must be calling out, but he doesn’t hear her of course, so she walks over to the car to give it to him. It takes her a second when she bends down by the passenger door to realize something’s wrong. When she straightens up to scream, I squeeze off a round and drop her. Now I survey the area again, looking for witnesses. Back on the front door, a teenage girl is framed in the opening. She looks toward the driveway, and her mouth pops open in horror. She disappears back inside the house before I can get a round off. Shit! It was time to get outta Dodge two minutes ago.

I lay the rifle down on the towel I’ve placed there for it, climb out of the load bed, close the tailgate and hop in the truck. A car coming towards me passes as I fire the engine up. Good thing this state doesn’t require a license plate on the front. I put her in gear, check my mirror, then pull out in the road. I head for the highway where there’ll be lots of traffic to lose myself in. 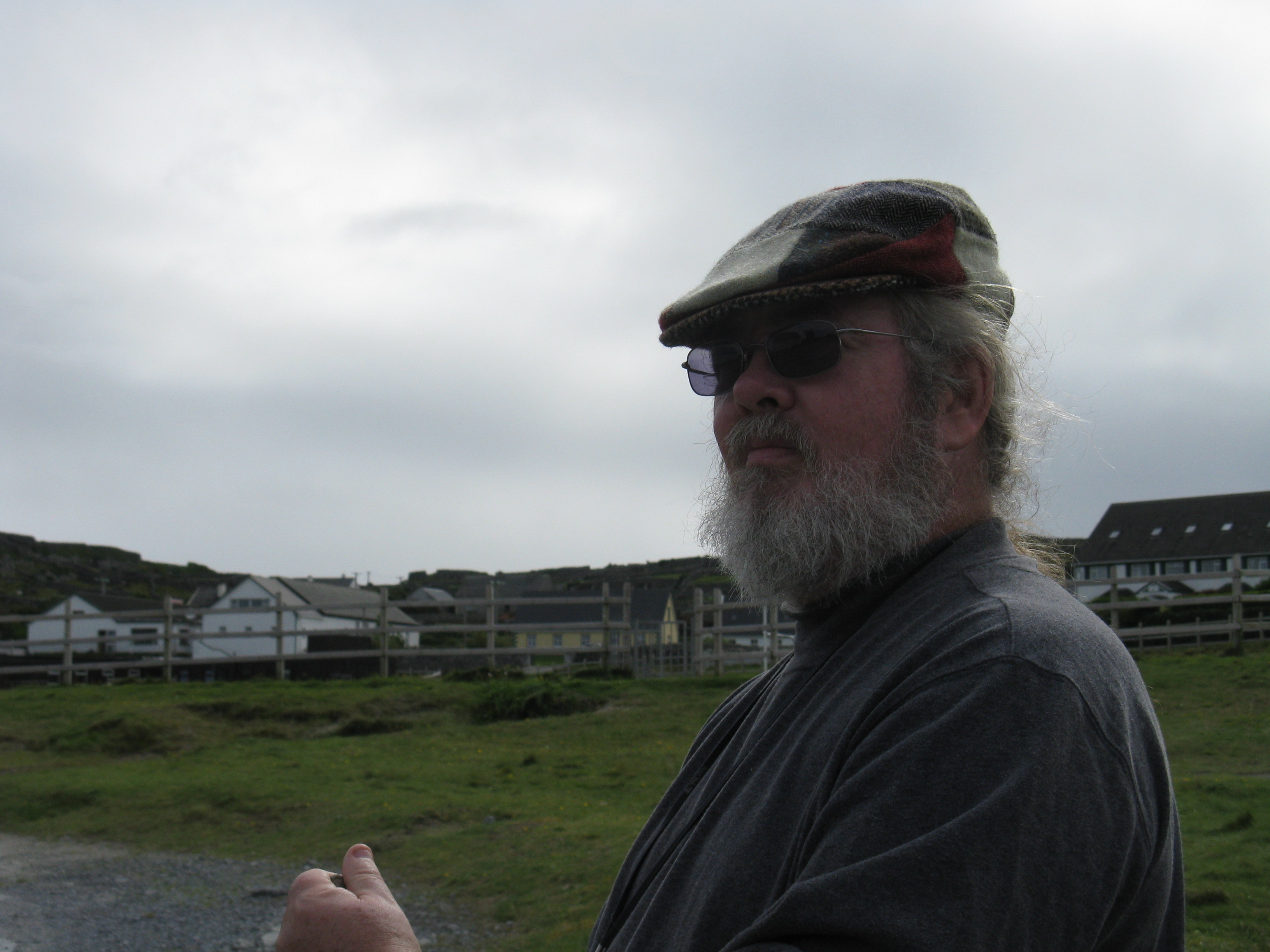 Thomas A. Burns, Jr. is the author of the Natalie McMasters Mysteries. He
was born and grew up in New Jersey, attended Xavier High School in
Manhattan, earned B.S degrees in Zoology and Microbiology at Michigan
State University and a M.S. in Microbiology at North Carolina State
University. He currently resides in Wendell, North Carolina. As a kid, Tom
started reading mysteries with the Hardy Boys, Ken Holt and Rick Brant,
and graduated to the classic stories by authors such as A. Conan Doyle,
Dorothy Sayers, John Dickson Carr, Erle Stanley Gardner and Rex Stout, to
name just a few. Tom has written fiction as a hobby all of his life,
starting with Man from U.N.C.L.E. stories in marble-backed copybooks in
grade school. He built a career as technical, science and medical writer
and editor for nearly thirty years in industry and government. Now that
he’s a full-time novelist, he’s excited to publish his own mystery series,
as well as to contribute stories about his second most favorite detective,
Sherlock Holmes, to the MX anthology of New Sherlock Holmes Stories.

Comments Off on Sniper! Tour